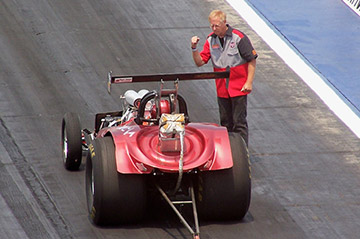 One of our favorite shot from our 2007 Walkabout Across America. Shot at the Hot Rod Reunion, held that year in Columbus, by GGWNY member Mary Cedeno. Thanks Mary.

Phil and Dee Morris, Publishers of Gasser Wars Magazine, have been involved in motorsports printing since 1972. They have also been involved in the sports of drag racing and boat drag racing since the 60's. Both Dee and Phil are graduates of Frank Hawley's Drag Racing School in Pomona. Dee (at the ripe old age of 50) earned her super comp license in 1997 and crossed her license over to Funny car in 2002. She will be driving their Blown Alcohol Altered at various West Coast Nostalgia Races, and in Goodguys Nostalgia Eliminator 1. 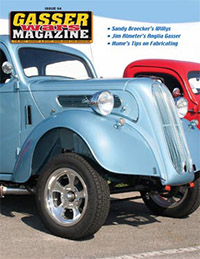 Our Nostalgia Eliminator 1, 1932 Bantam with a blown 392 Chrysler has qualified in the top 5 for the last several years at both the March Meet and the California Hot Rod Reunion. With Dee driving this beast she has shown that this is one of the most consistant roadsters on the NHRA Heritage series for NE1 at Fomosa. Read about her number one qualifying positon at the 2009 CHHR and her luck or devine intervention encounter in Gasser Wars Magazine issue #64.